The Israel Council on Foreign Relations (ICFR) is a non-partisan forum for the study and debate of foreign policy operating under the auspices of the World Jewish Congress. Established in 1989 by the late Dr. David Kimche and a group of prominent practitioners and scholars of international affairs, the Council aspires to stimulate public awareness of world events and insightful discussion of foreign policy issues, particularly regarding Israel, the Middle East, and Jewish affairs.

The ICFR is a favored platform for distinguished foreign visitors who wish to present their views in a nongovernmental setting, and regularly organizes public and closed-door lectures and symposia. Since its inception, the Council has hosted numerous heads of state, prime ministers, foreign ministers and other outstanding guests from abroad, as well as prominent local scholars and politicians. A wide cross section of Israeli society, including government officials, Israeli and foreign diplomats, university professors, leading business people, journalists, and promising students, participates in the activities of the Council, which accommodates a wide range of viewpoints.

In 2006, the ICFR launched its flagship publication, The Israel Journal of Foreign Affairs, which appears three times per annum and is published by the London-based Taylor & Francis.

Through the ICFR's Young Diplomats Forum, foreign diplomats currently posted in Israel are able to meet with their Israeli counterparts to discuss issues of common interest. 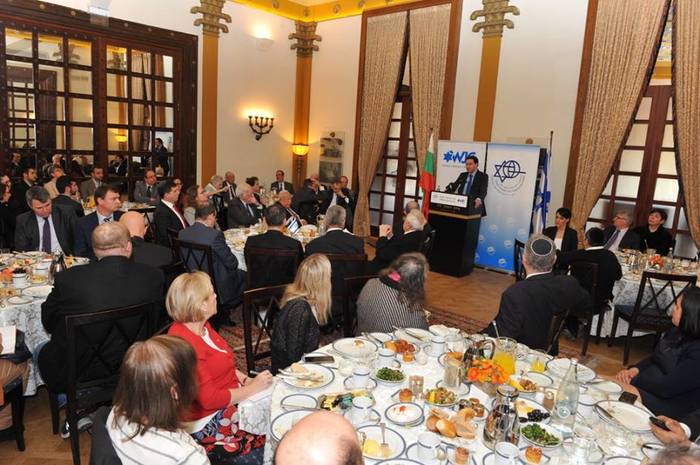 The Israel Journal of Foreign Affairs

Founded in 2006, Тhe Israel Journal of Foreign Affairs is the Council's flagship publication. In a short time, the journal has succeeded in developing a strong reputation, attracting the writings of many leading authorities in various aspects of foreign affairs from Israel and abroad.

In an attempt to engage and encourage tomorrow's diplomats and scholars, it has also published a number of papers by outstanding graduate students from institutions in Israel, Australia, Canada, India and the US.

The journal regularly publishes the proceedings of lectures presented at the Council and these constitute an important record of the remarks of visiting foreign officials. The journal is now circulated worldwide, and among its subscribers are ministries of foreign affairs, Israeli and foreign embassies, major university libraries and institutes/councils of foreign affairs

The ICFR Young Diplomats Forum, launched in April 2011, enables young Israeli diplomats (under 40 years of age) and their international counterparts currently posted in Israel to enhance their knowledge of, and exchange ideas on, issues of common interest. It also affords participants an unparalleled networking opportunity.

The Forum provides an opportunity for participants to interact through closed-door, Chatham House-style policy meetings, which are generally held at the residences of ambassadors to Israel. These policy talks are devoted to specific themes relevant to the current Middle Eastern and international agenda. In this way, the foreign ambassadors of tomorrow acquire both a substantive knowledge of Israel and a network of Israeli contacts, both of which are beneficial to the evolution of future relations. Similarly, the Israeli young diplomats gain an invaluable understanding of the countries their foreign counterparts represent. The Forum also affords participants an unparalleled networking opportunity. 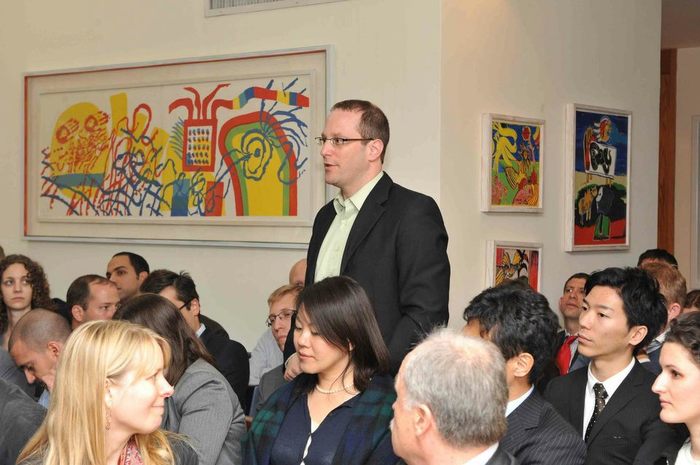 A conference on this topic was held jointly by the Council and the Konrad-Adenauer-Stiftung Israel. Speakers included Susanne Wasum-Rainer, Ambassador of the Federal Republic of Germany to Israel, Roderich Kiesewetter, CDU/CSU faction spokesman of the Foreign Affairs Committee at the German Bundestag, as well as scholars on the topic including David Witzthum, Gisela Dachs, Moshe Zimmerman, and Peter Lintl. The panel was chaired by Marcus Sheff, CEO of Impact-se.

The Council co-sponsored the inaugural international Model United Nations conference at the Hebrew University of Jerusalem.

Gebert, a journalist, associate fellow of the European Council on Foreign Affairs and a former Solidarity activist delivered a lecture titled "From Round Tables to Divided Societies: Poland and East Central Europe 30 Years After the Fall of Communism."

The Ambassador of the Russian Federation spoke on the topic “Russia and the Middle East: Yesterday, Today, and Tomorrow."

UN Special Coordinator for Middle East Peace Process, who spoke on "Israel, the UN and the Peace Process."
Download lecture

Film Screening: "A Voice among the Silent"

In cooperation with the Menachem Begin Heritage Center, the ICFR screened this film on the legacy of James M. McDonald and invited director Shuli Eshel and Holocaust historian Rafael Medoff for a panel discussion afterward.

The outgoing Bulgarian Ambassador to Israel delivered a lecture on developments in the Middle East.

French Minister of Justice (in cooperation with the IDC Herzliya European Studies Center) who spoke on "France in the Process of Change: Law, Reform and Society."
Download lecture

The Minister of Foreign Affairs of Canada spoke on "Perspectives on Canada–Israel Relations."

Chairman of the Parliamentary Committee on Foreign Relations, Former Minister of Foreign Affairs (2011–2014), Republic of Kosovo, who spoke on “The Foreign Policy of Small States: The Case of Kosovo.”

The Minister of Justice of Hungary spoke on "Unity and Diversity in Europe: Different Views, Common Goals."

Prime Minister of the Palestinian Authority, whose speech on "The Current State of Affairs Between Us" was delivered by Riad Malki, Minister of Foreign Affairs and Minister of Information.

The Ambassador of Canada joined a panel discussion on the topic “Are Ministries of Foreign Affairs Passé?” as part of the Israeli Association for International Studies conference on “International Relations: Between Nationalism and Globalism.”

The General Secretary of the Indonesian Muslim Organization “Nahdlatul Ulama” spoke on "Shifting the Geopolitical Calculus: From Conflict to Cooperation."

Thirty-Ninth President of the United States, who spoke on "My Study Trip to the Middle East."
Download lecture

President of the Republic of Bulgaria

Foreign Minister of the Czech Republic, who spoke on "Reflections on Czech–Israeli Relations in Light of EU Policies."

The Head of the EU Delegation to Israel spoke at a panel discussion on the topic "Whither Europe: Has the Death Knell of Liberalism and Tolerance been Sounded?"

Prime Minister of Sri Lanka, who spoke on "The Current Political Situation in Sri Lank and a Vision for the Future." The event was sponsored by Ms. Rina Pushkarna, proprietor of the Tandoori chain of Indian restaurants.
Download lecture

Secretary-General of the Organization of American States (OAS)

Foreign Minister of Albania, who spoke on “Reflections on the Past and the Present in Albanian Foreign Policy."
Download lecture

The President of the International Committee of the Red Cross (ICRC)

Minister of Foreign Affairs of Romania, who spoke on "The Eve of the Bucharest Summit: The New Romania, NATO and Israel." The event was sponsored by Bank Leumi.
Download lecture

The Minister of Foreign Affairs of Lithuania spoke on "Modern-Day Challenges in International Relations: A Lithuanian Perspective."

Prime Minister of Bulgaria, who spoke on "The Strategic Dimension of the Bulgarian–Israeli Partnership."
Download lecture

The Prime Minister of the Republic of Macedonia spoke on "Enhancing Security, Improving Economy: Joint Efforts of Israel and Macedonia."

Foreign Minister of the Czech Republic, who spoke at a roundtable discussion on "The Middle East as Seen from Middle Europe."
Download lecture

The Chairman of the Presidency of Bosnia and Herzegovina

Chairman of DIE LINKE faction, head of the opposition in the German Bundestag and former Chairman of the Party of Democratic Socialism (PDS), who spoke on "Europe and the Crisis in Ukraine: Is the International Community Facing a New East–West Conflict?"
Download lecture

The President of Poland and a panel of scholars spoke on "Poland and Israel: Confronting Global and Regional Challenges."

President of Ukraine, who spoke on "Ukraine and Israel: A Dialogue for the Future."
Download lecture

Foreign Minister of the Kingdom of the Netherlands, who spoke on "Israel and the EU: Beyond the Horizon."
Download lecture

Prime Minister of Albania, who spoke on "'Righteous among the Nations'—Albania's History of Friendship with Jews and the Jewish State."
Download lecture

Foreign Minister of Israel, who spoke on "Israel and the Middle East at a Crossroad."
Download lecture

The Foreign Minister of Macedonia spoke on “Developments in the Middle East and their Reflection in South East Europe: The Macedonian Perspective.”

President of the Dominican Republic, who spoke on the challenges to statecraft in the modern era.
Download lecture

The Deputy Prime Minister and Minister of Foreign Affairs of the Kingdom of Belgium spoke on “The Fight against IS: A Challenge for Both Europe and the Middle East.”

Former Vice Chancellor and Minister of Foreign Affairs of the Federal Republic of Germany (in cooperation with the IDC Herzliya Center for European Studies and the Heinrich Böll Stiftung), who spoke on "The German Foreign Ministry and the Nazi Past."
Download lecture

The Minister of Foreign and European Affairs of the Republic of Croatia spoke on “Foreign Policy Cooperation between Croatia and Israel.”

Foreign Minister of Bulgaria, who spoke on “The Tectonic Changes in the Middle East and How They Resonate in Europe: A View from Sofia.”

President of Latvia, who spoke on "Latvia and Israel."

Minister of Foreign Affairs and Trade of Hungary, who spoke on “The Crisis in Europe: The Hungarian Perspective.”

Foreign Minister of Spain, who spoke on "The Peace Process: Facts and Expectations."

Foreign Minister of Bulgaria, who spoke on "EU Policy for the Middle East: A Bulgarian Perspective."

Lord Mayor of Manchester, who spoke on "Muslims in the UK and Europe."

International Editorial and Advisory Board